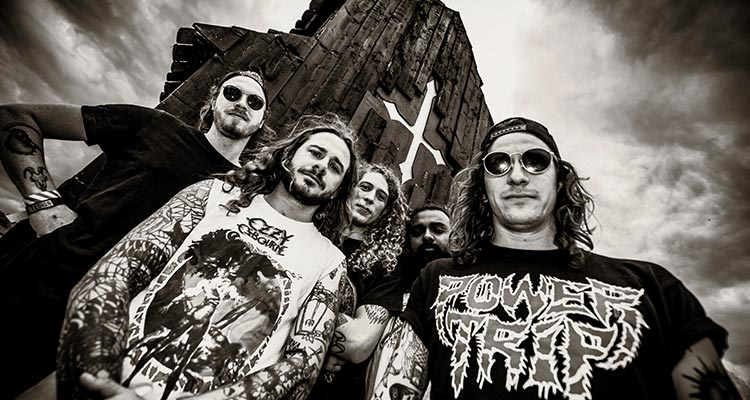 Here at Alcatraz we enjoy a generous helping of old school death metal. As far as we’re concerned bands like Obituary, Morbid Angel, Hypocrisy, Bolt Thrower, Entombed, Napalm Death or Dismember can drop by every year.

We’ve hosted several of these bands in the past while others called it quits before we had the chance to bill them; others still are too expensive or the timing hasn’t been right so far. And then there are the newcomers on the scene, some of which are very talented and have a clear-cut idea of where they’re going. One of those promising newcomers is a Danish band called Baest (Danish for ‘brute’). The Danish quintet may not reinvent the vintage death metal book of recipes, they do manage to put their own spin on the genre. Based on the signature HM-2 guitar sound, Baest’s sound obviously has a Scandinavian connection but they are not averse to incorporating British (Bolt Thrower) and US influences (Death) in their tracks. In the wake of strong albums such as ‘Danse Macabre’ (2018) and ‘Venenum’ (2019), the fans are eagerly anticipating that crucial third album ’Necro Sapiens’, which is set to drop early next year. Of course we hope that the old guard will continue for a while longer but with successors to the throne like Baest and LIK the future is looking bright. The fact that Phil Anselmo & The Illegals wanted to take Baest out on tour next year is not a coincidence as the former Pantera frontman is known to have a good ear for raw metal talent.