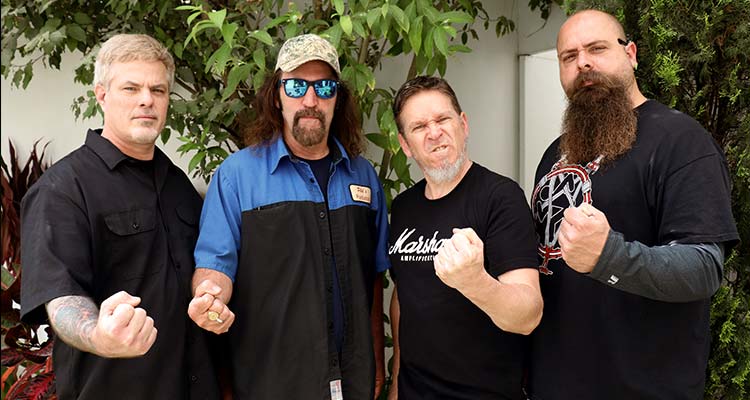 It’s the mid-80s and something is afoot in the parental home of Kurt and Erik Brecht. Mom and dad live in a decent neighbourhood in Houston but not all is peace and quiet because the two brothers are rehearsing with their band.

The ruckus is grating on father Brecht’s nerves and in a fit of anger he shouts a string of obscenities at his sons, including the band’s name. The tone is set and D.R.I is up and running. Just two months later D.R.I. play their maiden gig and a mere six months after their inception they’ve spawned an 18-minute EP with 22 tracks. D.R.I. draws inspiration from hardcore and punk (rock) but when they move to San Francisco thrash influences work their way into the music. ‘Crossover’ drops in 1987 and the title is spot-on. Whereas both genres have been developing separately until then, D.R.I. concerts are a universe onto themselves where hardcore and metal fans mingle. Slam dancing and stagediving - two concepts rooted in hardcore – now become commonplace at metal shows as well. D.R.I puts crossover on the map together with S.O.D., C.O.C., Excel and Suicidal Tendencies and inspires such essential acts as Slayer, Dark Angel, Anthrax and Kreator to name but a few. Contrary to many of their genre peers the band doesn’t implode in the tumultuous 90s. There’s been no new output since 1995 but they keep up a busy touring schedule. D.R.I.’s punk attitude takes them back to the smaller clubs and they stay active on that scene until guitarist Spike Cassidy is diagnosed with colon cancer in 2006. After his recovery D.R.I. saddle up again and it gives us great pleasure to bill this legendary band for the first time.