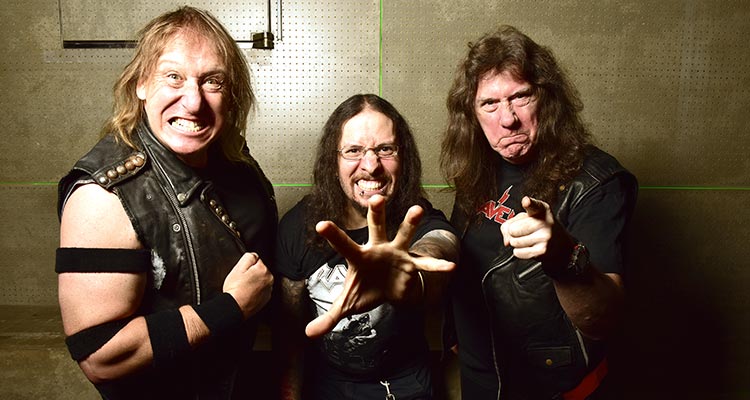 ‘Legendary’, ‘innovative’, ‘true originals’... these are just a few of the labels that have been pinned on Raven over the years. And rightfully so! In a music scene overflowing with clones and fed by labels with a cookie-cutter mentality, the unique personality of the band members has always shone through.

From their well-documented early days as NWOBHM figureheads, to trailblazing US tours in the early to mid-80s when bands like Metallica & Anthrax rose to prominence, through the decline in the late 80s and early 90s when the grunge-obsessed media wrote off so many metal acts, Raven’s staying power is what pulled them through because they were the real thing in a scene infested with poor imitators. In 2000 these power metal godfathers released ‘One for All’ in a production by Michael Wagener, who was also in the driving seat on 1983’s ‘All for One’. In true Raven tradition, ‘One for All’ runs the gamut from anthemic rock songs to brutal heavy metal while even venturing into virgin riffing territory. Following Mark Gallagher’s lengthy recovery from a serious accident in 2001, the band resurfaced in the festival circuit in 2004 & 2005. While 2007 and 2008 were spent alternately writing new material and appearing at festivals, the ultimate Raven album 'Walk Through Fire' was completed in 2009.The band subsequently toured the world and explored new frontiers, rediscovering themselves and hooking up with friends old and new – they made a real splash in South America! Released in 2012, ‘Walk through Fire’ is Raven’s 12th full-length and it brings the frantic speed and thrash-infused NWOBHM style we’ve come to know and love. The following year saw the release of the holy grail for Raven fans: the DVD retrospective 'Rock Until You Drop - A Long Day's Journey' that spans their entire career including previously unreleased footage of live shows, studio/backstage craziness and lots of interviews with the band and some of their contemporaries. Halfway through their joint 2013 tour with genre mates Diamond Head, Raven embarked on their biggest US tour ever, then hopped across the pond with Girlschool as an opener. Raven started 2014 on a high note with their participation in the 70,000 Tons of Metal cruise, followed by a series of Brazilian gigs including a little shindig in a football stadium in Sao Paulo in front of 61,000 rabid metal fans as openers for their long-time friends in Metallica! Just a few months ago Raven unleashed their latest slab with the well-received ‘Metal City’. With new drummer Mike Heller behind the kit they have every intention of living up to their reputation as one of the most exciting power metal acts on the planet. They have two previous appearances under their belt (2010 & 2017) and we are proud to welcome back Raven to the Alcatraz Prison Stage.