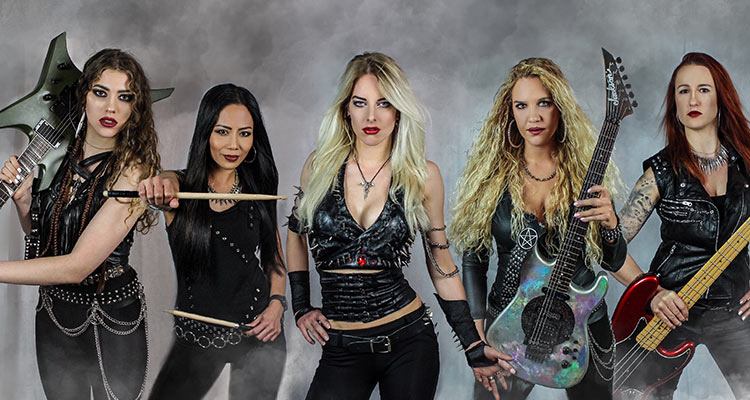 Swiss guitarist Romana Kalkuhl’s dream to form an all-female heavy metal band starts to take shape when she quits Atlas & Axis and joins her bassist friend Jeanine Grob in the search for a female lead vocalist.

They recruit the formally schooled Seraina Telli and the line-up is completed by battering ram Lala Frishknecht and second guitarist Alea Wyss. Produced by Desctruction figurehead Marcel Schmier, ‘Burning Witches’ is packed to the hilt with NWOBHM-influenced scorchers. It’s vintage 80s heavy metal for the modern age and if Rob is the metal god then Burning Witches are his high priestesses. They return quickly with ‘Hexenhammer’ (2018) and with Schmier once again behind the controls their second offering continues the onslaught while mixing in spoonfuls of thrash, speed and power metal. Meanwhile Wyss is ousted in favour of by Sonia ‘Anubis’ Nusselder of Sepiroth fame and Telli moves on to different endeavours to be replaced by Dutch vocalist Laura Guldemond. She features on the single ‘Wings of Steel’ and the upcoming third album will mark her full-length debut for Burning Witches. Classic heavy metal fans will love the old school vibe, the blistering tracks and musicianship of these metal vixens.