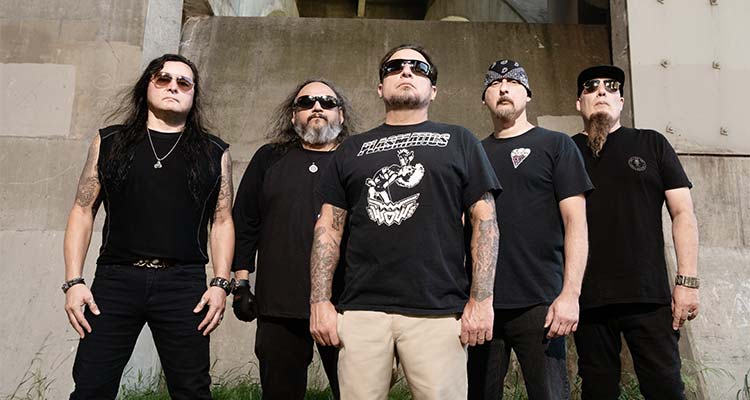 EvilDead was founded in 1987 with the aim of making heavy music in true thrash metal style. Right off the bat they made a lasting impression with a unique blend of speed and thrash riffs, backed by frenzied drumming and a thundering bass.

Lyrically EvilDead dwelled on political on social themes, the threat of nuclear war and even a dash of horror. In 1988 the EP ‘Rise Above’ generated a strong underground buzz but it wasn’t until one year later that the seminal album ‘Annihilation of Civilization’ took the world by storm. ‘The Underworld’ featured a more metal-oriented sound but in spite of positive reviews EvilDead folded in 1992. Fast-forward to 2009 when founding members Juan Garcia (guitarist, also a member of Agent Steel and Body Count), Rob Alaniz (drums) and Mel Sanchez (bass) responded to the persistent outcry of the masses to resurrect EvilDead. After a string of concerts things quietened down again but several years later the LA-based band made another comeback – and this time original vocalist Phil Flores had rejoined the fold. The release of ‘United $tate$ of Anarchy’ (2020) not only sealed the deal on the comeback but also ended a 29-year drought in terms of new output. Yet another highly anticipated Alcatraz debut!