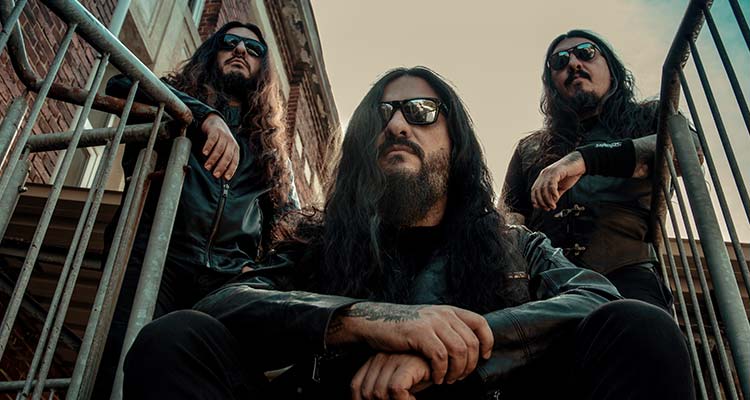 In 1990 the Brazilian brothers Moyses Kolesne (guitars), Max Kolesne (drums) and Alex Camargo (bass/vocals), who goes by his mother’s maiden name, decided to form a death metal band. The trio were heavily influenced by Slayer, Morbid Angel and Sodom and played uncompromising death metal, fast as a shark and with ultraviolent lyrics.

A few early demos helped them build a local fan base and in 1995 their debut long player ‘Black Force Domain’ came out on a small local label. Their sophomore outing met with a favourable response and paved the way for the much acclaimed ‘Conquerors of Armageddon’ (2000), their first album on Century Media. All the Krisiun hallmarks are there: hellishly fast riffage, thundering drums and blast beats throughout, Camargo’s powerful growls and utterly vicious lyrics. Over the years Krisiun haven’t strayed very far from their basic formula but they deliver consistent quality: you can pick up any album and never come away disappointed. Highlights include ‘Southern Storm’ (2008) with its grooving vibe, surgically precise brutality and the boundless energy of a threesome going for broke on every track. Krisiun bring a unique, visceral and meticulous onslaught that benefits from the kind of innate connection that can only exist between brothers. Listen to their last studio outing to date ‘Scourge of the Enthroned’ for another slab of feral, high-speed, no-nonsense death metal.